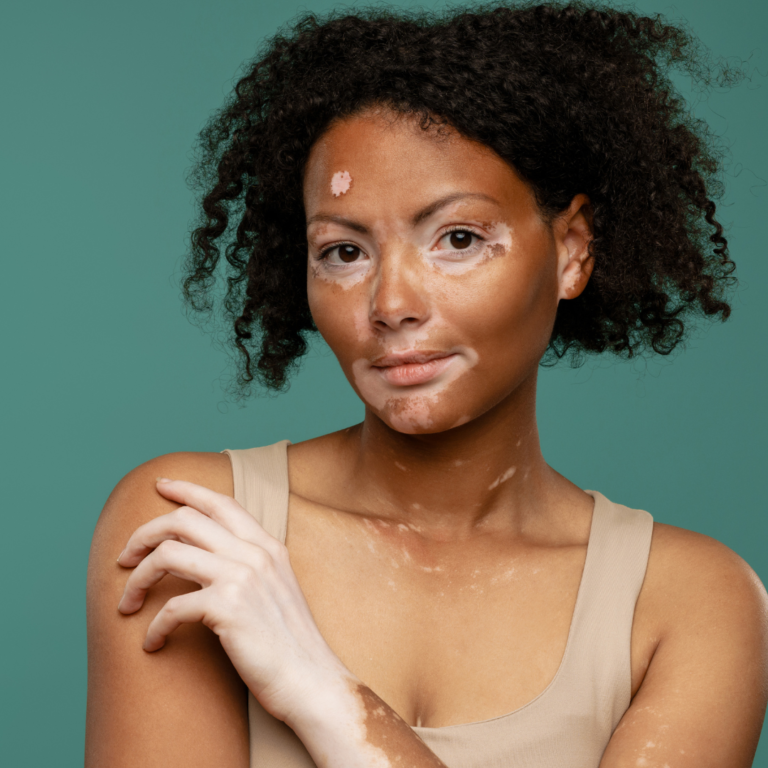 Vitiligo, also called Leucoderma is a chronic skin problem characterized by white or gray patches (depigmentation) in the skin. White patches affect different areas of the body including face, arms and hands, trunk, and legs.

Typically both sides of the body are affected by Vitiligo, with patches often beginning on skin areas more exposed to the sun.
It is more noticeable in people with dark skin. Vitiligo may result in stress & embarrassment, and those affected are sometimes stigmatized.

It can be completely disfiguring if not treated. The current treatment involves the use of synthetic steroids that have serious side effects like thinning of skin and in extreme conditions, skin cancer can be one of the symptoms of steroid abuse.

Vitiligo is not contagious & not infectious condition, and there are no known risks to children born to parents with the condition.

Many people with Vitiligo have a family history of the disease, although it is not fully understood whether Vitiligo is genetic or inherited.

The exact cause of Vitiligo is unidentified. It is believed to be due to genetic susceptibility triggered by an environmental factor such that an autoimmune disease occurs. This results in the destruction of the Melanocytes, the skin pigment cells.

In this diagram, you can see the Melanocytes getting killed , hence creating the depigmented Vitiligo patches!

Depigmentation of skin; pale patchy areas of depigmented skin tend to occur on the extremities.

Some people may experience itching before a new patch appears. The patches are initially small but often grow and change shape.

Some people may experience itching before a new patch occurs. The patches are initially small but often grow and change shape.

The exact reason for the development of Vitiligo is not entirely known.

There are top 4 hypotheses:

2: Neural Hypothesis – Accumulation of a neurochemical substance decreases melanin production. Melanocytes could be damaged by a toxin released by nerve endings or that they produced.

3: Autocytotoxic metabolites of melanocytes in the melanin synthesis

Why Holistic treatment is critical for Vitiligo?

The treatment of Vitiligo with holistic medicine is unique in its own way. As an autoimmune disease, the approach to treating this disorder must be looked at both internally and externally. Because it is an autoimmune disorder, attention must be paid to what is happening inside your body. In addition, treatments that target external causes of the disease need to be implemented.
A Holistic approach is critical to treating Vitiligo because it addresses the disease’s physical, emotional, and spiritual aspects while also focusing on positive lifestyle habits like a healthy diet, exercise, and stress management.
Dr. Pallavi Vasisht’s Vitiligo Wellness Program focuses on the 7 step strategy for treating Vitiligo from the inside out.
This program is designed to help you get your life back from the symptoms of Vitiligo and prevent further discoloration. The program focuses on the seven-step strategy for treating Vitiligo from the inside out. Homeopathic herbs and supplementation advice, diet, nutrition, pranayama, and skin applications are some aspects of the Vitiligo treatment regimen.

Experience a personalized wellness program created just for you.
Book the program now and start your journey toward better skin health and healing!